Many important processes in nature are rare events: i.e. they happen randomly, after typically a long waiting time, but they are very significant when they do happen. Examples of rare events include earthquakes, financial crashes. catastrophic weather events, etc. Obviously we would like to be able to predict such events using computer simulations - but rare events are notoriously difficult to simulate because of the long waiting times before they happen. For events that happen in equilibrium systems (by which, from a simulation point of view, we mean systems whose dynamics obeys the law of detailed balance), many smart simulation methods have been devised to deal with this problem. These include transition path sampling, transition interface sampling, umbrella sampling, the string method, and others. However, for rare events that happen in non-equilibrium systems, few methods exist.

During my postdoctoral stay at AMOLF in Amsterdam, I worked together with Pieter Rein ten Wolde to devise a rare event simulation method that can be used for non-equilibrium systems with stochastic dynamics. Our work was motivated by the flipping of genetic switches, but the method is actually very general. The method that we devised is called Forward Flux Sampling. You can read about it in various papers that we have written, and also in papers that have appeared by other people that use the method. We have also more recently extended the method to account for time-dependent rare event situations, and to allow the computation of phase space densities as well as rates of rare events. Together with Kai Kratzer and Axel Arnold, I have also devised methods to speed up the postioning of interfaces in FFS. I have also worked with Juho Lintuvuori and Kevin Stratford here in Edinburgh to construct a generic chassis for the use of FFS in parallel simulations, which is compatible with the LAMMPS molecular dynamics simulation software.

Here I give just a brief introduction to how FFS works. The aim is to calculate the rate at which the rare event of interest happens, and to obtain a collection of simulation trajectories corresponding to the event, which can be analysed to obtain information on the mechanism. These trajectories are members of the 'Transition Path Ensemble'. The method is illustrated schematically below. Briefly, we choose an "order parameter", or collective coordinate, here called lambda, which can be used to monitor the progress of the simulation towards its desired end point (which we call B) from its starting point (which we call A). We use this order parameter to define a series of "interfaces" in phase space, defined by specific values of the order parameter. We then run a simulation starting in the A state, during which we collect configurations that correspond to crossings of the first interface. These configurations are used as starting points for a series of new simulations, which we run until they either reach the next interface (in which we store the final configurations), or they return to A. This process is then repeated at every interface until we reach B. To compute the rate at which the rare event would happen in an unbiased simulation, we simply multiply the rate at which the system reached the first interface, by the product of "success probabilities" for our simulation runs at each interface. Moreover we can also reconstruct full trajectories from A to B by "sticking together" the simulation runs that we performed between interfaces. 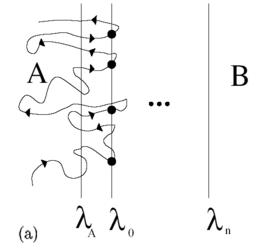 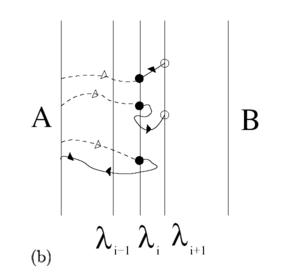 FFS can be applied to many different types of rare events, not just the flipping of genetic switches. For example, in my work I have applied it to polymer translocation through pores when a pulling force is applied, and how crystals nucleate when there is a shear flow in the surrounding liquid. Other people have also used FFS for nucleation of NaCl crystals, the diamond-graphite transition of carbon, folding of a lattice model of a protein, wetting of hydrophobic surfaces, and droplet coalescence.

Here are links to the papers we have written about FFS.

Basic papers about the method:

Use of FFS to compute phase space densities:

Here is a great 3 minute video of our PhD student Freya Bull describing her research modelling bacterial infection of a urinary catheter!

We are searching for a part-time computer systems administrator for our group in Jena. Please contact us if you are interested!

Welcome to Ariane Zander who has joined us as a technician in our lab!