Using a super-intense beam of neutrinos - which are all around us, but pass unseen through almost all matter - MINERvA is able to study what happens when these elusive particles finally do interact.

The MINERvA detector is in a cavern deep under the Fermi National Accelerator Laboratory in Illinois. It sits in the path of the NuMI beam, whose pulses consist of trillions of neutrinos - very light, invisible particles from the lepton family; similar to electrons, but with no electric charge. Almost all of the neutrinos are able to pass through matter unimpeded, but with such an incredibly intense beam, just a few of them interact in the detector, giving us a window to what happens when neutrinos interact with different materials.

When a neutrino interacts with atomic nuclei, it can produced a charged particle called a muon. While neutrinos are invisible, the MINERvA detector can see muons, and can measure information about them such as the direction they are moving in, and how much energy they are carrying. For example, a muon-neutrino can turn a neutron into a proton, producing a muon. Similarly, a muon-antineutrino can turn a proton into a neutron, producing an antimuon. 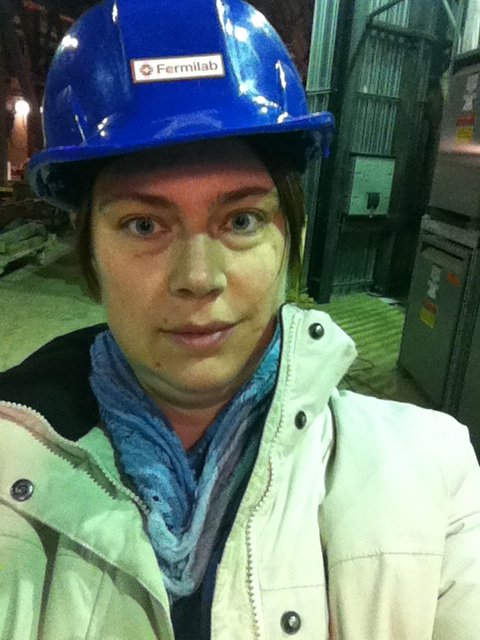 The interactions of neutrinos with free protons and neutrons are well understood, and we can use them to infer some otherwise-hidden information about the incoming neutrino, such as what energy it must have had, and how much of its momentum was transferred to the nucleon. However, when looking at heavier nuclei - like those of all the materials that make up our neutrino detectors - the situation becomes more complicated. We know that the presence of a nucleon’s neighbours changes the way that it interacts with other particles like neutrinos.

Some of this can be explored by looking at how electrons - much easier to work with than neutrinos - scatter electromagnetically from different materials. But for the full story, we need to look at neutrino scattering, which happens via the much rarer weak interaction. This was what studied for my PhD dissertation. By performing MINERvA’s first ever two-dimensional analysis of the muon momentum distributions, for antineutrinos scattering from carbon nuclei, I saw evidence that the simplistic model of the nucleus, which the community has used over recent decades, was insufficient. Instead, the scattering fitted better to models that include more complicated interactions between the individual nucleons in the nucleus. It supported a theory that nucleons form pairs - mostly of a proton and a neutron; sometimes of two protons or two neutrons; which are more tightly bound to each other than to the rest of the nucleus, by a process known as meson-exchange currents.

Knowing the neutrino-nucleus scattering cross section is also vital for neutrino oscillation experiments such as T2K and NOvA, which have been studying how neutrinos change flavour as they traverse long distance of the order of hundreds of kilometres. These experiments are now starting to look at antineutrino oscillations, using cross section measurements from MINERvA and other experiments to determine whether neutrinos and their antimatter partners behave differently, which could help provide clues to the matter-antimatter asymmetry in the universe.